A great man once said, “Those who cannot remember the past are condemned to repeat it.” That short phrase cannot be more evident than in a construction-estimating environment.

Contractors know they are supposed to keep track of job costs and they spend plenty of time, energy and money doing so… only to abandon the data once jobs are completed. Odd as it may seem, some contractor’s repeat this behavior, over and over, job after job, only to wonder why the last estimate was so far off.

In simple terms, there are only two reasons to track costs; one is to compare ongoing production costs to the budget, and two, to feed back usable cost data to estimating so they can be more knowledgeable and accurate when preparing the next bid.

A very basic view of the model of a successful contractor is as follows: the estimating team prepares the bid, the job is won, the job is built while ongoing costs are monitored, the project is completed, and the final job costs are passed on to estimating in a usable format for preparation of future bids.

It’s this final important piece that actually closes the loop and is the payoff for the time, energy & money expended in the process. Actually, the entire construction process is a repetitive one, and as a contractor, you are supposed to get smarter with each and every repetition. “Getting smarter” means knowing and using your past costs of construction when preparing your next bid! Doing so increases your competitiveness and repeatedly reduces risk with each and every cycle. We’ve prepared a graphic to help you see the light: 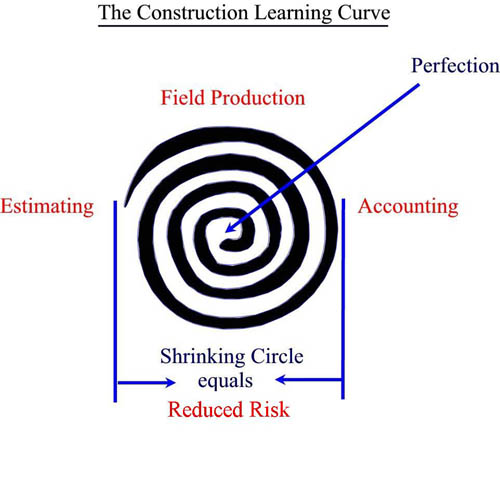 To establish useful estimating information from job costs there are two important steps to be followed. First, the estimating department must assemble the budget in such a way that clearly segregates the items that will provide them useful cost information. Second, upon completion of the project the cost of each item and the associated quantity of work performed must be converted into usable historical unit costs to be added to the estimating database. As the historical unit costs are accumulated, future estimates can be based on fact rather than fiction.

That’s where we come in. Druml Group, with the coordinated effort of estimating and project management, can help you set up a routine system to convert your job costs to unit costs and store them for use by estimating. By developing and implementing such a system, you will not only bid with greater accuracy, you will be confident that if you are the low bidder, you will be able to rely upon the numbers and count upon the profits. Get in touch with us today, we can help you take the guess out of guestimate, leaving you with accuracy in your estimating.