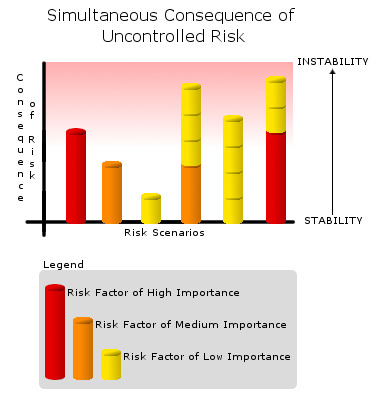 Ignore Construction Risk Factors at Your Own Peril

“These don’t apply to my business.” We had just presented a client with a proven list of 75 risk factors that can impact a construction company’s ability to make a profit. He circled 20 and said the rest were of no consequence.

If we hadn’t previously run a number of construction companies and closely observed hundreds more, his words may have cast doubt. But we knew better. Some risk factors are certainly less important than others, but they all can play a roll in causing business failure; even seemingly unimportant risk factors can interact with one another to have a large impact.

As you can imagine, there are many different types of risk factors and for the most part they are specific to an industry. Some are really important because the harm they can cause is great. Others are of lesser importance because the harm they can cause is not so great, thus having a smaller impact. To actually determine the impact a risk factor can have (its importance), takes years of case study. But suffice it to say, importance varies.

Now a case in point:

The particular contractor mentioned at the beginning of this article was a General Contractor (the word “was” is telling). One of the risk factors he determined was of no consequence was taking on new types of work without prior experience. Another was estimating without historical data. In the months to come, this contractor decided that it could make more money by doing the rough carpentry work (framing) of buildings by itself rather than using subcontractors.

In California, there are separate companies that do framing and that is all they do. It is very competitive and the cost is simply driven by how fast carpenters can put lumber in place. This GC proceeded to bid three large school projects. Now it had done schools before, but never the framing. We personally advised against the approach indicating that the estimating staff did not have experience bidding framing work, that the estimating staff did not have any historical information on hand to rely upon, that the personnel were not in place to do the framing, and that the company had no prior experience doing the work. Well, this particular contractor looked at themselves as a risk taker. Indeed they were. The net result was as follows:

This particular GC was in business for over seven years and had been quite successful. However, GCs work on very tight margins. The contractor could ill afford to lose large money on the framing, but they did, and it cost them their business. That was all based upon risk factors that the contractor did not consider of importance.

Let’s look at another case in point:

A contractor performed steady work in a niche market and historically made good money, however it didn’t have a contract review procedure in place. In fact, this contractor had signed a contract without having reviewed it completely and was unaware of the insurance requirements. One of the requirements was for $5MM of pollution coverage, but the contractor only had $1MM in place. The contract was for repair of 450 balconies on a 40-story apartment complex. It had done this type of work on large structures before, but never for a building that did not have air conditioning.

During the summer months it became unusually hot while work was underway and many of the 450 residents had to keep their windows open because of the stifling heat, even while the contractor was chipping and grinding out the old concrete that needed repair. Concrete dust invariably drifted into some of the apartments. Simultaneously, the owner had given notice of eviction to a lawyer. To get back at the owner, he banded a bunch of the residents of the apartments together convincing them of great rewards, and proceeded to file a lawsuit against the owner for allowing cancer causing silica dust to harm the health of all of the residents. Since a lot of the residents were old, having little funds, and had little to do with their time, they had nothing to do but listen to an evicted attorney. Once the thought of cancer causing dust was put in their minds, even the invisible bothered them.

During that time, one of the residents who had chronic respiratory problems was hospitalized even though work was not being performed at the time near her apartment. This just fueled the claim that all the residents were being exposed to a major health hazard, even though open windows were being covered with a filter cloth. Unfortunately, the court approved the suit as a class action with all 450 residents represented. The owner in turn tendered the suit to the contractor only to find out that the contractor did not have $5MM of pollution coverage in place as called for in the contract. The contractor had no choice but to reject the tender and the owner began to pick up the attorney’s fees to defend itself.

During this time, another risk factor came into play, one that contractors often pay little attention to, namely, computer backup. The contractor had a backup system in place for its server, but it wasn’t being checked. Well, the server went down. No problem, call the computer guy and get it fixed, right? Well, it wasn’t that simple, the hard drive had crashed. No problem, get another drive up and running and use the backup to restore it. Big problem. There was no procedure in place to check that backups were running properly and a backup had not run properly for almost a year!

The computer consultant tried to retrieve the data to no avail. Now the contractor has several problems going:

This led to many countless sleepless nights. Could it get worse? No, it got better.

After a month of down time, Intel was able to recover the data, the contractor was able to produce financials, the accounting staff was able to get caught up, the class action lawsuit was dismissed after the owner’s attorneys had built up close to $750K of fees, the contractor’s carrier picked up the tab only causing the contractor to lose the $25K deductible, and the contractor did not have to start a new company, nor go broke. But what did it cost him?

Well, historically, this contractor made $250K in profit year after year. At the close of the fiscal year containing all of the problems, the company recorded only $24K in profit and opted to make up for the business lost during all of the distractions by taking on a big job in a different type of work. The jury is still out.

Moral of the Story

Food for Thought
From our experience, it’s clear most contractors rarely recognize the risk factors that can and will hurt them. We’ve seen that even though a risk factor may seem “unimportant”, it may interact with other “unimportant” factors to cause great financial harm.

So the real question becomes: how do we lower the potential consequence of risk related to a multitude of risk factors in order to prevent loss or potential failure? The Answer: adopt an Enterprise Risk Management (ERM) method of running your business. The ERM process identifies risks factors that might otherwise be unknown, establishes a way to assess the level of risk with respect to each risk factor, and determines what kind of controls need to be put in place to minimize risk and the potential consequences.

Most important though, ERM makes the risk management process manageable. Remember, just because you choose to ignore risk, risk won’t ignore you.